As you know, this tragic crash occurred September 30, 1955 at 5:45 pm near Cholame, California. It has been the subject of many independent investigations and research studies over the years. Recently, National Geographic decided to review it again, using a different approach and new crash science.

Their researchers discovered Visual Statement and asked us to participate and use modern approach in a new reconstruction. We eagerly volunteered as it was a great opportunity to show the world our latest software technology. Therefore, our Mike Kennedy ( CEO ), and our Mike Greenfield (Director of Forensic Mapping) met the film crew from London, England at Cholame, California in April of 2005, to reconstruct the crash, in real time at the actual crash location.

James Dean was enroute to an amateur road race in Salinas, coming from Los Angeles. He was driving his brand new 1955 Porsche Spyder 550, which he had just purchased for the purpose of his amateur racing activities. He was accompanied by Rolf Weutherich, a German mechanic, sent by Porsche to support new American owners of racing Porsches. They took a route that caused them to pass through Cholame, California on Highway 46. Shortly before the crash, Dean was pulled over by a CHP officer and ticketed for speeding.

At approximately 5:45 pm, Dean was westbound passing through the “Y“ intersection at

Highway 41, one mile east of Cholame. At that point, Donald Turnipseed, driving a 1950 Ford business coupe, turned left in front of Dean, and the collision occurred. Dean was killed almost immediately, and Weutherich was ejected from the Porsche and found beside the drivers side of the car at final rest. Dean was found slumped against the passenger door, which sparked a long standing controversy about who was driving. Turnipseed rotated counter clockwise and slid sideways from impact to rest about 38 feet east of the impact point. Dean’s Porsche traveled about 45 feet from impact to rest in a northerly direction. CHP officers attended the scene and took some photographs and basic measurements.

The television show producer asked us to address the following issues, based on rumors and discussion over the years since the crash:

We were provided with a series of photographs of the scene taken by CHP Officers. We were also supplied with their reports and a sketch. The sketches were great for 1955 but lacked the accuracy of modern day scale diagrams which would allow precise speed analysis and vehicle positioning. As you can see in the scanned images, bits of information from all of this material had to be assembled to allow a scene
reconstruction.

The supplied background information then had to be supplemented with the crash scene measurements of the overall geometry. These simply did not exist. As one can see the sketch, not only was not to scale, but was not based on any measurement protocols and was geometrically inaccurate. That meant developing the overall scene diagram as a
separate task, and then integrating the evidence information. That process was done by using the photograph showing the skid marks and final rest of the Ford using photogrammetry software..

This image (above right) was central to the scene reconstruction and development of an accurate crash scene for speed calculation and 3D animation.

Creating a diagram of the roadway was challenging because of the crudeness of the original diagram (hand drawn; not to scale) and lack of measurements in any type of standard format (baseline or triangulation). Therefore, we measured the scene geometry using a Nikon total station, and removed the recent improvements of the traffic island and turn bay, leaving the original shape of the intersection. To that basic geometry, we inserted the top down rectified photo of the scene.

Calculating speeds was done using the Conservation of Linear Momentum process. The Vista FX graphical momentum solution was employed as shown (below). The vehicles were positioned at maximum engagement, and then the approach and departure vectors were simply dragged into position.

This analysis was very sensitive to approach and departure angle variations and the graphical, real time calculation update provided by the Vista FX Momentum tool really made the process much easier than any other method. I constantly checked the Delta V calculation while adjusting the vectors and post impact deceleration rates. I wanted the Delta V’s to make sense when comparing Momentum calculated Delta V’s to crush based Delta V’s. The Delta V’s were really quite high (Ford: 31 mph and Porsche: 63 mph) but when one looks at the damage of each vehicle, and especially the Ford, given the 2:1 mass disparity, it makes sense. I suggested a range of speeds based on the fact that there is a some uncertainty in the accuracy of the photo rectification process, and the estimated Delta V’s from crush. 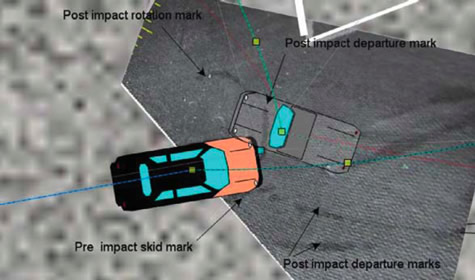 Continuing the linear momentum analysis, we adjusted the departure vectors slightly, to create a consistency with the delta v’s (speed changes) exhibited by damage. (See actual scene photo on the right). When the delta v’s from momentum were aligned, we had impact speeds in the range of 70 – 75 mph for the Dean Porsche and 55-60 for the Turnipseed Ford. Any results expressed with greater precision would not be realistic when we consider the accuracy of the foundation data.

Many readers may ask how we calculated the post impact deceleration rates. The answer is simply that we started with a simple approach of estimating the drag factor and then fine tuned it by calculating the angle vs baseline friction iteration which resulted in post impact values that seemed reasonable – again in relation to damage based speed changes.

When we had the speed values we simply generated a 3D animation using the Real Motion 3D component of Vista FX2. Vista FX2 allows users to simply transfer momentum results to animation paths instantly. Within five minutes we watched our first animation of the crash.

With the scene constructed, analysis done, and the animation complete, the next part was to use the animation results to answer the original questions that National Geographic asked us.

Who was really driving?

To answer that question we placed human models in the Dean Porsche and created a slow motion animation to demonstrate the impact alignment in relation to occupant positions.

The slow motion animation (above) showed clearly that whomever was driving was struck directly by the left front corner of the ’49 Ford coupe. The animation also showed that the passenger was being pushed laterally out of the passenger side door.

The marks on the roadway indicated the Dean vehicle rotated violently in a counter clockwise fashion which relieved the occupant forces and explain why the mechanic Rolf, was found outside the vehicle, on the driver’s side at final rest. As the vehicle rotated, Rolf was pushed out the passenger door, and the vehicle continued to rotate to final rest, so he was found near his ejected position.

At rest James Dean was reported to be found in the passenger position, with legs in the driver’s well. It makes perfect sense. Let’s face it, after the impact, there really was only room for one!

An eyewitness was in a 48 Ford truck following the Turnipseed ’49 Ford into the collision. He swears, to this day, that Jams Dean was in the passenger position at impact. With the animation already built, it was easy for me to add another vehicle and put an animation camera in the driver’s position of the Ford truck following the distance of 50 yards behind to examine his opportunity to see who was driving.

The animation which resulted was a compelling depiction of what the witness had for a view and for how long. These snapshots to the right do not really do it justice but give you an idea of the value of being able to instantly create graphics that will support or refute what a witness states.

The biggest question:
Why did it happen?
Why did Turnipseed turn in front of Dean?

The view from the wheel of Turnipseed became a very useful tool in determining why it happened. We proved clearly that there was no vertical visibility obstruction, so then why? I believe that it was because the color of the Porsche made it inconspicuous in the background color of the roadway and because Turnipseed was turning left onto another highway at highway speed, so he simply stopped looking directly ahead, where Dean was approaching and turned his attention to the road he was turning onto.

To explain that, we created another view of the same animation from Turnipseed’s perspective. (see left)

This snapshot from the real time animation precisely places both vehicles in time prior to collision and clearly, Dean was there to be seen, if Turnipseed remained focused ahead.